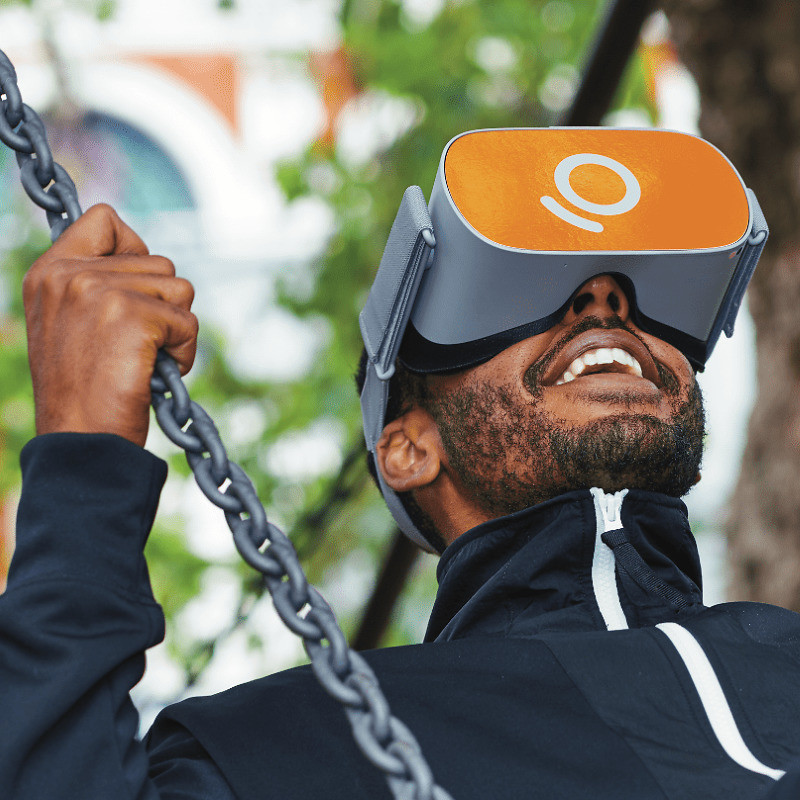 Designed and produced by Studio Go Go, Volo is a da Vinci-inspired virtual reality swing experience. Wearing a VR headset as they swing, Riders are transported into exhilarating dream experiences, with four iconic flying machines to choose from, each offering a different sensation of flight.

Volo celebrates the 500th anniversary of Leonardo da Vinci's creations, and is inspired by his fabulous flying contraptions, his studies of flight and his pioneering work on perspective.

Riders will groan in horror before squealing with delight as they pilot their swing-powered machines over cliff edges to flap over buildings, zoom along the water, spiral upwards through clouds and float back down to earth. But watch out - modern airspace is more crowded than da Vinci envisaged half a millennia ago!

The 4 VR Swings experiences are:

Glider
Undulate on the solar winds as around you gliders climb and dive, weaving trails across a futuristic desertscape. But watch the skies... you are not alone in this extraterrestrial airspace.
Thopter
Fly like a bird, swooping low over a tempestuous sea, through city streets, and over mountain passes. Follow your guardian angels... straight into the flightpath of a nearby airport.
Copter
Propel yourself up, up and away! Perform in a swirling aerial ballet that will paint psychedelic patterns high above the countryside below. You’ll be spellbound, at least until that storm rolls in...
Chute
Rocket skyward to reach the edge of space. Burst through a kaleidoscopic barrage of fireworks, then float on the breeze, swaying serenely towards the earth. But who packed your parachute?

Originally commissioned by City of London Corporation and supported by Culture Mile and Arts Council England.

Electric Dreams is an exploration of the art of immersive storytelling. Supported by the British Council, the exhibition will bring some of the best virtual, augmented and extended reality experiences by British artists working right now to Adelaide Fringe audiences. An industry conference will run alongside the exhibition and will feature leading international artists and creative technologists.
Electric Dreams is curated by Crossover Labs: award-winning producers of immersive and interactive work, Immersive Curators at CPH:DOX Copenhagen, Silbersalz Science and Media Festival Germany, and Electric Dreams Adelaide and London. Through an international programme of labs and workshops, they develop the next generation of global immersive producers.