The Island of Doctor Moron - the film 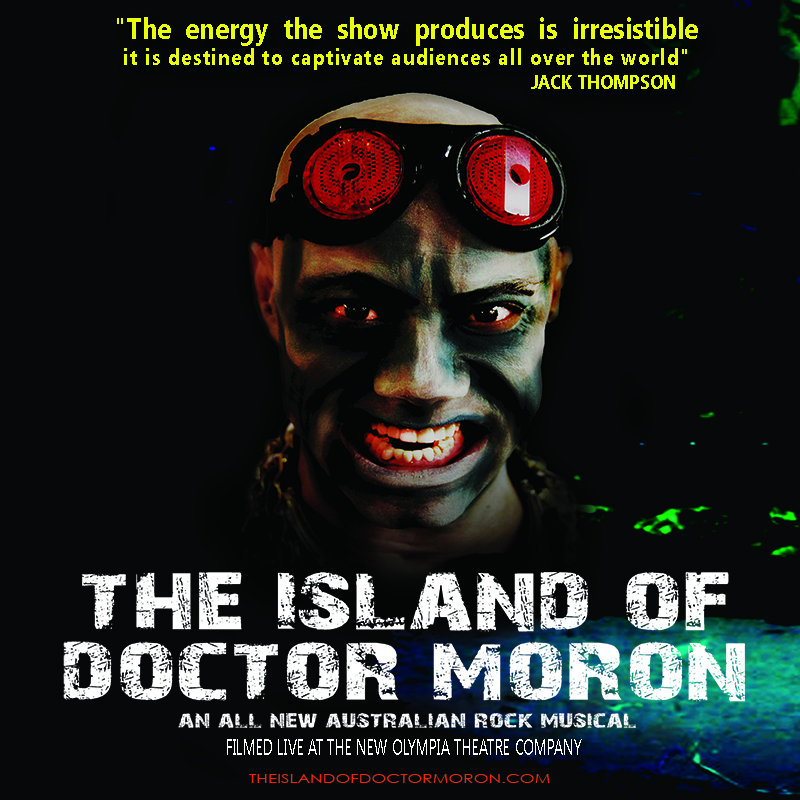 “At last! A film of an original Aussie rock musical that really ROCKS!”
21 original songs.
Amazing music.
Unbelievable dancing.
The original stage version of The Island of Doctor Moron® premiered at The New Olympia Theatre, Paddington, November, 2014 to rave reviews and sold-out shows. Audiences returned to see the show many times. Now, this phenomenal rock musical is available as a cinematic masterpiece for exclusive screenings to communities across Australia who would otherwise be unable to experience the energy, delight and excitement of this phenomenal show. The film is unprecedented in Australian film history. Never before has there been a cinematic film of a live, completely, original, Australian rock musical. Peopled by an assortment of larger-than-life characters, driven by 21 original songs and relentlessly demanding choreography and delivered in mind-blowing 5.1 surround sound, the show leaves audiences, applauding in the aisles, stunned, amazed and enthralled.

The New Olympia Theatre Company and Island Grunt Pty Ltd, have produced the first and only cinematic film of a live production of a completely original Australian rock musical, The Island of Doctor Moron®. The film is what producer, Chris Dockrill, calls a 'high-powered, hybrid film' which uses modern film and audio technology to provide an intensely intimate and moving experience of this unique live show which smashes through the ‘fourth wall’ and delivers in perfect 5.1 surround sound. To date, the film has been screened across Australia almost every week since its sell-out launch at The Dendy Opera Quays in March 2016. It will be in the USA and Europe within the next 12 months. The film has screened in large, medium and boutique cinemas, live theatres, small to large community halls and recently at the Published Arthouse in Adelaide. Each screening is an exclusive event; DVDs will not be available nor has the film been syndicated. The Fringe Festival screening is a one-off.