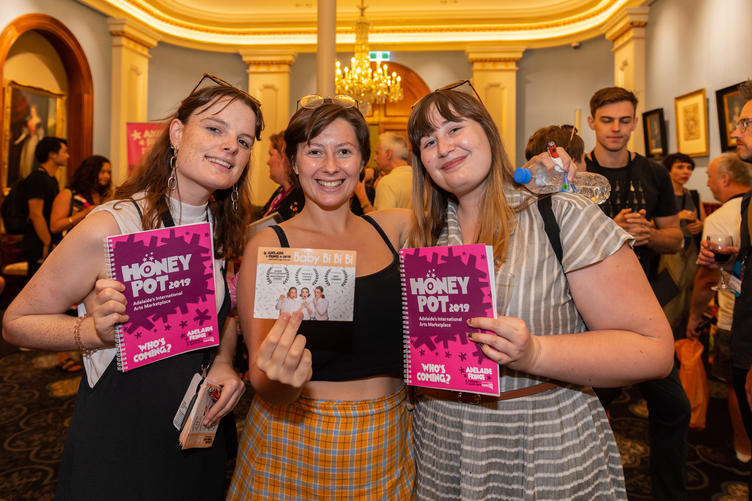 Industry delegates from around the world attend Adelaide Fringe to see shows and meet artists for future bookings and onward opportunities. It is recognised as a valued platform connecting artists and their projects with a broad range of national and international industry decision makers.

Adelaide Fringe 2019 saw 256 delegates from 26 countries participate in Honey Pot representing a projected value in deals of more than 4 million dollars. Tracked outcomes already exceeding 200 interstate and international touring and performance bookings as a direct result of the Honey Pot.

Honey Pot is open to programmers, festivals, producers, bookers, talent scouts, venue owners, film and television producers, tourism industry, and just about anyone who is looking to connect with Fringe artists to discuss future bookings.

Adelaide Fringe Director and CEO Heather Croall said, “The meetings we set up in the Honey Pot lead to touring deals and long term relationships between artists, venues and festivals around Australia and the world. The Honey Pot marketplace is a way for Fringe to support artists year-round, not just during the month of Fringe. It is amazing to see how the Honey Pot has built capacity for so many artists—it creates earning (and learning) opportunities for them year on year. The Honey Pot platform is strengthening creative industries in Australia and beyond.”

Over the past 5 years Honey Pot has seen exponential growth with touring deals for artists, growing ten-fold since 2015, further solidifying the Adelaide Fringe's international reputation and industry recognition as an important launch pad for artists.

Tammy Ryan, Head of Programming at the Frankston Arts Centre in Victoria said, “Honey Pot gave us access to the national and international market of work that we have never had access to before.”

Registrations to be a Honey Pot Industry Delegate are open between 3 October–13 December via Adelaide Fringe’s AVR platform: click here.

Recognised by the Australian government as a key marketplace for international buyers and programmers of work, Honey Pot has been awarded 3 DFAT (Department of Foreign Affairs & Trade) grants to bring in key international industry delegatesin 2020, adding to the diverse contacts to made from becoming involved with the program. The following DFAT grants won and recipients attending Adelaide Fringe are:

The ASEAN council grants generates opportunities for Australian business to work and partner with South-east Asia and will be supporting Adelaide Fringe to host 3 delegates from Malaysia & The Philippines.

"Honey Pot: Adelaide’s International Arts Marketplace is supported by the Australian Government through the Australia-ASEAN Council of the Department of Foreign Affairs and Trade.”

The Australia-Korea Foundation (AKF) was established by the Australian Government in 1992 to promote bilateral relations between Korea and Australia, and will be supporting Adelaide Fringe to host 4 delegates from Korea.

"Honey Pot: Adelaide’s International Arts Marketplace is supported by the Australian Government through the Australia-Korea Foundation of the Department of Foreign Affairs and Trade.”

"Honey Pot: Adelaide’s International Arts Marketplace is supported by the Australian Government through the Australia-Japan Foundation of the Department of Foreign Affairs and Trade.”

Honey Pot is also being supported by the Government of South Australia’s SA Export Accelerator program–aimed at developing international markets, and has been awarded a grant in recognition of its ability to export South Australian artists internationally.