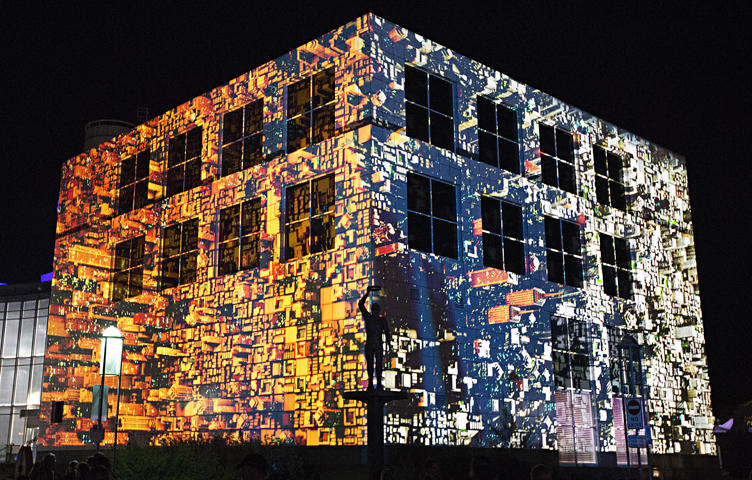 In 2016, Adelaide will be treated to the Fringe Illuminations, which will see the iconic buildings of North Terrace transformed into living canvases of light.

Adelaide’s cultural boulevard will be re-imagined with colour and movement for the first two weeks of Adelaide Fringe (12 – 28 February), with the State Library, the South Australian Museum, the Art Gallery of South Australia and University of Adelaide buildings illuminated by architecturally mapped projections.

Adelaide Fringe Director and CEO Heather Croall said she was eager to see Adelaide sparkle for the 2016 Fringe.

“This spectacular art installation on our beautiful buildings along North Terrace will be the perfect event to enjoy between Fringe shows. The cultural boulevard will become a major route for Fringe-goers to travel between venues and marvel at the incredible Illuminations,” said Croall.

The animated content in the Fringe Illuminations will reflect the activities within the buildings. Renowned Adelaide projection company illuminart is working closely with the South Australian Museum and the State Library to create projections that bring to life some of their collections. The Electric Canvas will be creating projections for the University of Adelaide and the Art Gallery of South Australia. Both illuminart and The Electric Canvas will be producing projections that will be interactive and allow the audience to determine what is projected.

To open the Adelaide Fringe, there will be a very special official Kaurna opening ceremony at sunset on the South Australian Museum forecourt on Friday 12 February at 8pm. This will coincide with the lighting of the Fringe Illuminations and they’ll then be on display every night from 8.30pm – 1am until 28 February. They will of course be free!

The Fringe Illuminations won’t stop at North Terrace either, as projections are set to take place at numerous establishments throughout the city. Fringe archival footage will flicker on walls around the CBD from sunset to midnight during the Fringe. These projections will light up the facades of Palace Nova East End Cinemas, Tuxedo Cat on Hyde Street, the Edinburgh Castle Hotel, Red Fox Café, The Coffee Pot and 2KW.

To help registered Fringe venues illuminate themselves, Adelaide Fringe will also be providing a special ‘Illumination Kit’ to enable them to stand out in the night. Look out for the pink glowing lights. Adelaide Fringe also encourages all businesses in Adelaide to "light up pink for the Fringe".

The Fringe Illuminations are supported by the South Australian Museum, State Library, The University of Adelaide, the Art Gallery of South Australia, illuminart, The Electric Canvas and Mosaic.