Adelaide Fringe Ready To Party With Release Of 2019 Program 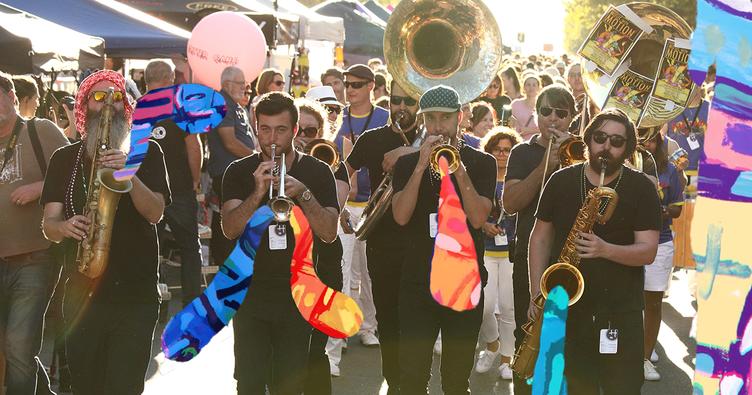 The party that defines a city is on its way! Adelaide Fringe has today revealed a bigger and bolder 2019 program featuring a more diverse and inclusive line-up than ever before.

Tickets are now on sale for all 1326 events (up from 1235 in 2018) being held as part of Australia’s largest arts festival, which will light up Adelaide from February 15 to March 17. More than 7000 artists will entertain and educate audiences about a broad range of themes such as disability, mental health and the LGBTIQ+ community, with more than 450 acts making their Adelaide Fringe debut.

Of the 517 venues hosting festival attractions, A Club Adelaide, Tomich Vineyard and the South Australian Jockey Club are among the 108 newcomers set to discover the magic of hosting Fringe events. A variety of Fringe ‘hubs’ will span across suburban and regional Adelaide – from Gawler to Port Noarlunga, Whyalla to Mount Gambier, while the Fringe on Tour will reach Murray Bridge and IKEA for the first time. Major outdoor hubs Gluttony and The Garden of Unearthly Delights will return to the city’s eastern parklands, while the Royal Croquet Club is now known as RCC Fringe and will have a new home at the University of Adelaide.

Adelaide Fringe Director and CEO Heather Croall said the 2019 Adelaide Fringe would be an entertainment extravaganza with the festival seeing significant growth in the genres of circus & physical theatre (up 44.4 per cent), interactive (up 44 per cent) and theatre (up 21.8 per cent).

“Each year we see more and more artists getting behind our fabulous festival and putting on an increasingly diverse range of shows so that Fringe-goers have an exciting assortment of events to choose from, including wonderfully unique experiences like a music performance on a hot air balloon and a play set in a caravan park,” Ms Croall said.

“South Australians often say the Fringe is the happiest time of year in Adelaide. The joy the festival brings to audiences is immense, and we can’t wait to light up the city for another month of marvellous mayhem in 2019.”

The 2019 Adelaide Fringe boasts a diverse trio of Ambassadors – award-winning Australian comedian Judith Lucy, international cabaret performer Hans and AFL legend turned visual artist Gavin Wanganeen. Lucy and Hans will perform Judith Lucy Vs Men and Like a German respectively at next year’s festival, while Wanganeen will appear as a guest on Fringe Talk Show.

The 2019 Adelaide Fringe kick off with its dazzling Opening Night festivities on Friday, February 15, including a thrilling street party and the stunning Tindo Utpurndee – Sunset Ceremony down at the River Torrens/Karrawirra Parri near the University of Adelaide footbridge. The celebrations will also feature a free walking adventure, Yabarra: Gathering of Light, which is set to run on all 31 nights of the Fringe.

Held for the first time in 2019, Yabarra: Gathering of Light will illuminate the Torrens riverbank reeds, surrounding grasslands and paths to share stories from the local Kaurna culture. The immersive cultural experience will bring to life native animals and Aboriginal storytelling through mesmerising interactive installations of projection, sound and light.

Premier Steven Marshall said the city of Adelaide transforms during the Fringe – turning into an unforgettable mix of
cutting-edge performance, world-class culture and South Australian hospitality.

“It is a favourite with households across the state, and regional Fringes held in Whyalla, Mount Gambier, Port Augusta and Murray Bridge make it accessible for even more South Australians,” Mr Marshall said.

“I’m proud that the State Government continues to financially support the festival, making it even more affordable and appealing for artists from around the globe.”

The release of Adelaide Fringe’s 2019 program comes after last week’s Australia Council of the Arts report finding that national arts tourist numbers grew by a massive 47 per cent between 2013 and 2017, including a 61 per cent increase in those attending festivals, fairs and cultural events.

“Adelaide has become synonymous with one of the premier Fringe festivals in the world and, last year, attracted more than 20,000 interstate and international visitors who spent a record $29.5 million while they were here,” Mr Ridgway said.

“Not only does this bring an added energy and vibrancy to the city, but the positive economic impact extends far beyond the shows and artists to our hotels, restaurants, cafes and shops.”

Adelaide Fringe Chair David Minear said the Fringe was revered across Australia and internationally as “the people’s festival”.

“The Adelaide Fringe puts a bright, vibrant and positive face on Adelaide and South Australia for 31 glorious days and nights,” Mr Minear said.

“However, it would not happen without the significant support of our partners – in particular the Government of South Australia, Adelaide City Council and our Principal Partner, BankSA. We can all take immense pride in being the second biggest Fringe in the world and Australia’s biggest open access arts festival.”

BankSA Chief Executive Nick Reade said BankSA was proud to be in its 14th year of supporting the Fringe as Principal Partner.

“We want to ensure the Fringe is affordable and accessible for all South Australians to enjoy, so we’ll be subsidising tickets to a range of fantastic shows. And there’s never been a better time to be a BankSA customer with a range of discounts and benefits available, including discounted ticketing, priority entry to venues and priority seating at shows.

“As South Australia’s local bank, we are passionate about being a catalyst for growth and vibrancy in our state – and our partnership with the Fringe is just one of the ways we are doing that for the benefit of all South Australians.”

For the first time in the festival’s history Adelaide Fringe will have e-ticketing available, meaning ticket buyers can show an email confirmation on their phone to gain entry to Fringe events.

Tickets, gift vouchers and memberships can be purchased at adelaidefringe.com.au, FringeTIX box offices and outlets or by phoning 1300 621 255. The pop-up Rundle Mall FringeTIX box office is located at the corner of the Mall and Twin Street. A digital Fringe Guide can be downloaded from adelaidefringe.com.au before the printed program hits the streets in early January.

The 2019 Adelaide Fringe will run from February 15 to March 17. View the full program and purchase your tickets at adelaidefringe.com.au/fringetix