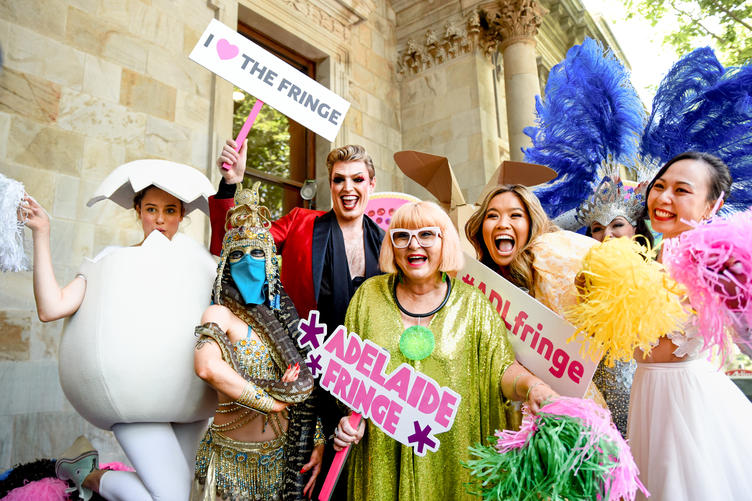 Adelaide Fringe has once again cemented its status as one of the world's leading arts festivals, generating $74.9 million in expenditure and bringing $50.1 million of new money into the state. Ordinarily the world’s second largest annual arts festival, Adelaide Fringe was the largest in the world over the past year.

Fringe goers actively chose to support the arts, business and the community this year, with over 32,000 tourists flocking to Fringe from all over Australia.The spend per tourist at Adelaide Fringe has almost quadrupled in the last 6 years from $607 per person in 2017 to $2,258 per person in 2022.

Adelaide Fringe in 2022 was a magnet for artists and producers with 5820 artists performing at 363 venues, where they presented a collectively inspiring 252 world premiers. A remarkable 1195 shows were presented in Adelaide Fringe selling a dazzling 727,567 tickets, an increase of 15% on last year.

Other economic and tourism outcomes of this year’s Adelaide Fringe include 178,055 visitor bed nights with interstate and international visitors and artists utilising South Australian accommodation.

Adelaide Fringe Director Heather Croall said, “Adelaide Fringe is a festival that is truly designed to support the arts and artists, and as this year’s economic impact statement confirms, the arts is an important industry in South Australia which causes a ripple effect that reaches thousands of local businesses across the state”, said Croall.

Ms Croall continued to explain that for every dollar in funding the Adelaide Fringe receives, it returns over thirty dollars back into the local economy and generates over 6,000 direct and indirect jobs.

The scale of Fringe requires enormous effort any year, but this year was particularly challenging in COVID times and would not have been possible without the once off COVID recovery grants from the State and Federal Governments. An additional $2.7 million of grants were raised and distributed to artists, producers and venue operators, to help reduce the financial risk for hundreds of shows across the Fringe.

BankSA State General Manager, Consumer, Ben Owen said BankSA’s long-standing partnership with Adelaide Fringe focused on encouraging South Australians to get out and about to attend shows again, which also helps businesses and supports economic activity. “We made it easier than ever for people to attend while keeping shows affordable and supporting emerging artists. The new digital BankSA MyFringe Planner helped 150,000 people plan their Fringe experiences online. Our ever popular 25 percent off ticket offer for cardholders supported over $430,000 worth of ticket sales, and we subsidised tickets to a range of shows by new artists with Support Act. It was fantastic to see South Australians embrace this year’s Fringe, at a time when the artists, venues and local businesses needed it most.”

Adelaide Fringe continues to be an incubator for the arts and a nationally recognised marketplace for creative industry businesses and professionals to leverage tours and new contracts based on the back of their exhibiting season at Fringe. The Adelaide Fringe Honey Pot program continues to streamline this process through encouraging and supporting arts industry leaders from around the world to attend Fringe and see shows while also facilitating opportunities for artists and industry to meet and converse. Just three months since Adelaide Fringe finished, the 2022 Honey Pot Program is currently responsible for 225 deals, totaling 2.5 million worth of income for the touring artists, a number projected to continue growing between now and the 2023 season.