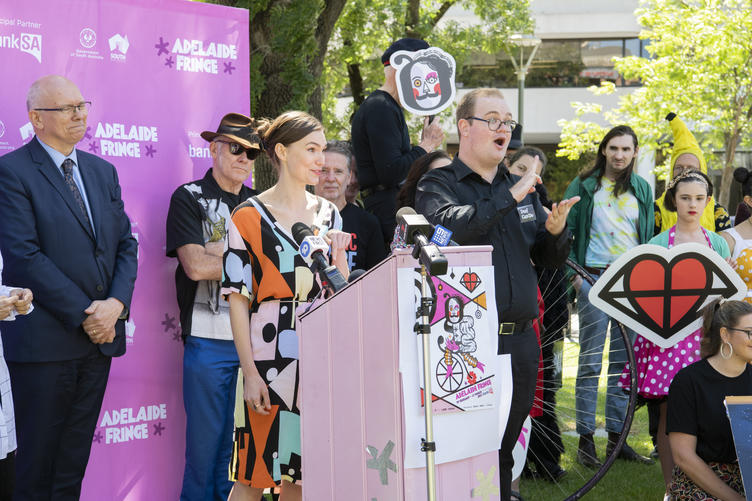 It's not often you meet a journalist who can cover a political campaign trail as comfortably as they can cover the showbiz beat. But that's Brooke Boney's core VP. TODAY's Entertainment Presenter masterfully balances her trademark relaxed outward glow with an inward fierceness that was borne from a childhood of disadvantage. Boney earned her big break on national youth radio station Triple J as the news presenter for Ben and Liam's breakfast show. Boney's passionate embrace of her Indigenous culture is uplifting. She's igniting discussion around indigenous affairs and sharing her message with sensitivity to the slow and subtle pace of progress. Best of all, she's doing it under the hopeful gaze of thousands of Indigenous youths across the country, who have someone to help them imagine themselves doing it too.

Brooke is coming to Adelaide Fringe for the first time in 2021 as an Ambassador alongside a stellar line up of individuals and is excited to see what all the fuss is about.

Multi-award-winning music duo Electric Fields are known for their immersive performances, bringing moments of breathtaking beauty and power to the stage. Featuring the rare and beautiful voice of Zaachariaha Fielding - who often sings in his traditional languages of the Anangu people - and the brilliance of composer and producer Michael Ross, this co-writing duo have headlined large festivals throughout Australia, Asia, New Zealand, The UK and Europe. Australian shows include Splendour in the Grass, APRA, Apple, Spotify and Vogue’s 60th Anniversary. “We are thrilled to have been invited to be Ambassadors for the Adelaide Fringe 2021 - a time in Adelaide where artists bring their dazzling creations to the streets and a time where art is celebrated 24 hours a day. We are proud members of Adelaide’s artistic community, of which The Fringe is the heart.”

Electric Fields will perform this Adelaide Fringe at Gluttony on February 20.

Known for his brilliant freeform improvisation and highly engaging live shows, Ross Noble has received huge critical acclaim, been nominated for a Perrier Award and was voted one of the greatest stand-ups of all time by British TV viewers, and now he’s an Adelaide Fringe 2021 Ambassador!

“Heading to Adelaide Fringe is always a highlight on my touring calendar and I am especially excited to be bringing a full run of my show to Fringe as an official Ambassador. COVID has really ripped the life out of live comedy over the past 6 months but to be on stage again in a city as fantastic as Adelaide is going to be amazing! I can’t wait to see you all COVID-safe in the city of churches!”

Tilda Cobham-Hervey is an Adelaide-born actor and creator who is best known for her work in I Am Woman, Hotel Mumbai and 52 Tuesdays. Tilda started her performing arts career at the age 9 as a member of the Cirkidz performing troupe. She performed her first show Up In Smoke at the Adelaide Fringe in 2006. At the age of 14, Tilda and a group of other young acrobats formed the circus company Gravity and Other Myths. They opened their first show Freefall at Adelaide Fringe in 2009 and have continued to perform at the festival nearly every year since. Tilda is thrilled to be home in Adelaide for the 2021 Fringe, and to have come full circle with representing Fringe as an Ambassador, is the icing on the cake!

Catch Tilda at The Capri Theatre on Sunday 21 February for her event In Conversation with..., hosted by fellow Ambassador and Today show Entertainment Presenter, Brooke Boney.