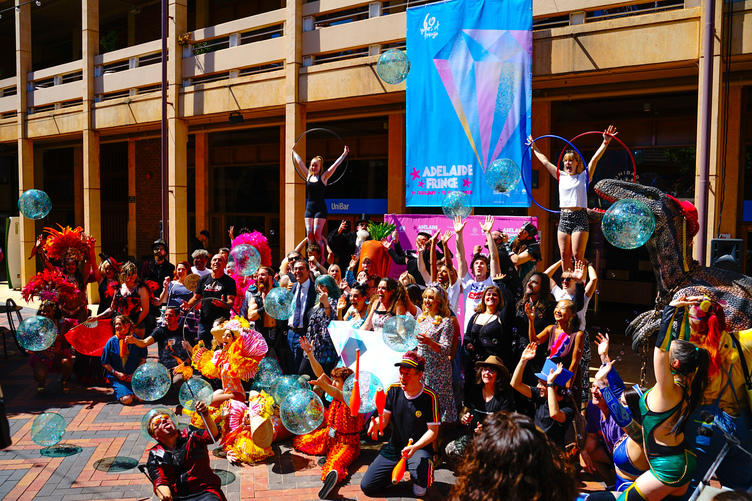 The party that brings a city to life will once again challenge and enchant audiences for the 60th anniversary of Adelaide Fringe in 2020, from February 14 to March 15.

Tickets for the 60th anniversary are on sale from 9am ACST 28 Novermber for all 1210 events, with more than 7000 artists and 361 venues set to take part in the event that lights up Adelaide and South Australia.

Adelaide Fringe Director and CEO Heather Croall said the substantial growth this festival has seen in the last 60 years has solidified its place as the largest arts festival in the Southern Hemisphere.

“We can’t wait to flood the city with the joy and mayhem that comes with Adelaide Fringe. It’s a time to be entertained and snuggle up under the cultural blanket we throw over Adelaide. The open and inclusive nature that goes to the very heart of Fringe really does mean that everyone can participate and there almost certainly will be something in the program for everyone”

“At Adelaide Fringe we see First Nations participation as vital to the arts, I’m so proud of our organisation’s signature project for 2020, Yabarra: Dreaming in Light, which speaks to this core value. Thanks to the support of the State Government of South Australia we have also given out $100,000 in grants to support the voices of First Nation artists s to present works at the 60th anniversary of Adelaide Fringe,” Ms Croall said.

Building on the success of the 2019 Yabarra: Gathering of Light, the new iteration is moving indoors to Tandanya National Aboriginal Cultural Centre where an immersive Dreamtime experience will be created. This will provide more opportunities for school groups, families and other diverse audiences to experience the project with daily opening hours running from 10am to 10pm. Working in collaboration with Kaurna Senior Custodian Karl Telfer, Yabarra: Dreaming in Light tells the Dreaming story of Tjirbruke, an ancestor of the Kaurna people.

To celebrate the diamond anniversary a range of free and family-friendly events have been planned. The Fringe Walk, located on North Terrace between King William Street and Frome Street, will allow Fringe lovers to take a trip down memory lane with all 32 Adelaide Fringe posters being displayed in large format from January 25 to March 15.

The Giant Sing Along, located at Lot Fourteen, will provide an opportunity for the young and the young at heart to sing along to 50 different classic hits through one of 32 auto-tuned microphones in a month long mass karaoke session. Giant Sing Along will be open every day of Fringe from 12noon to 7pm.

Serving as a permanent reminder of the auspicious year, Adelaide Fringe have produced a limited-edition coffee table book that looks at the event’s history and highlights across the past six decades, the book can be purchased at adelaidefringe.com.au

The 2020 event will kick off with its dazzling opening night festivities on February 14, including the Tindo Utpurndee – Sunset Ceremony at Rymill Park, Yabarra: Dreaming in Light opening, Baker Boy at RCC and East End road closures providing the perfect stage for audiences from all over to celebrate the return of Fringe in its 60th year.

This year a variety of Fringe ‘hubs’ will span across suburban and regional Adelaide – from Gawler to Port Noarlunga and Whyalla to Mount Gambier – with more than 60 per cent of Adelaide Fringe venues popping up in regional and suburban areas. Outdoor hubs Gluttony and The Garden of Unearthly Delights will return to the city’s eastern parklands, while RCC will reappear at The University of Adelaide.

Of the 361 venues hosting festival attractions, more than 100 newcomers are joining the festivities including a new hub at the heritage listed Ayers House on North Terrace.

Premier Steven Marshall said the city of Adelaide transforms during the Fringe into an artistic hub, creating jobs and boosting the local economy.

“Adelaide hosts one of the world’s best Fringe festivals, and last year attracted more than 20,000 interstate and international visitors who spent a record $29.5 million while they were here.”

“We’ve seen year-on-year increases in interstate and overseas visitation, which extends the economic benefit beyond the shows and artists, to our hotels, restaurants, cafes and shops, bolstering the South Australian economy.”

Adelaide Fringe Chair David Minear said the Fringe is infamous amongst artists and audiences across the globe and considered an incubator for the arts.

“Our city wouldn’t be the same without Adelaide Fringe, it’s an incredible injection of colour into South Australia and really puts the state on the map,” Mr Minear said.

“However, it would not happen without the significant support of our partners – in particular the Government of South Australia, City of Adelaide and our Principal Partner, BankSA. We can all take immense pride in being the second biggest Fringe in the world and the Southern Hemisphere’s biggest arts festival.”

BankSA Chief Executive Nick Reade said BankSA was proud to be the Principal Partner of the Fringe in its Diamond Anniversary year.

“At BankSA, we’re backing the events that contribute to the growth and prosperity of South Australia, so it’s no surprise that this is our 15th consecutive year as Principal Partner of the Fringe.

“The Fringe generates an uplift in visitation, activity and vibrancy, delivering a significant economic benefit for the state.

“Adelaide Fringe always delivers something new and exciting. This year we’ll be focussed on ensuring shows are accessible and great value so that more people can experience the magic of the Fringe.

Tickets, gift vouchers and memberships can be purchased at adelaidefringe.com.au, box offices and outlets or by phoning 1300 621 255.

The pop-up Rundle Mall box office is located at outside of Kmart in Rundle Mall and is open daily (except public holidays) from today until March 15th.  The full program of events and more can be browsed at adelaidefringe.com.au

The 2020 Adelaide Fringe is from February 14 to March 15. For more information, visit adelaidefringe.com.au.

Adelaide Fringe’s Opening Night featuring our traditional Tindo Upturndee, or ‘Sunset Ceremony’ to recognise the living culture of the First Nations, pay respect to the spirit of the land and give thanks to Elders past, present and emerging.

Opening on Friday 14 February at 9pm

For all 31 days and nights of the 2020 Fringe, we invite you to come experience the dreaming through cutting edge light technologies and state of the art illuminations. Free for all ages and all communities to share in. Yabarra will be a unique indoor cultural experience that will engage, immerse, and educate all who share the dreaming in light.

Take a walk down memory lane with Fringe Walk, a large-scale collection of all 32 Posters from the past 60 years of Adelaide Fringe.

Adelaide Fringe is hosting the karaoke to end all karaoke! In daily life, we don't get a lot of opportunities to belt out our favourite ballads to our heart's content—but at Giant Sing Along, you'll be welcomed with open arms. Come along, have some fun, and let loose with the joy of song.

When you become a Fringe Member, you become a part of something much bigger. You join the Fringe party of arts and events lovers in Adelaide and unlock secret events, free movie screenings and exclusive discounts all year round. For $40 you get Fringe Club access, four movie screening invites, access secret Fringe events and exclusive invites and discounts all year round. Adelaidefringe.com.au/join

Blank walls will again burst into life for the 2020 Street Art Explosion! Featuring brand new works that erupt with colour and creativity in Adelaide's CBD, alongside existing artworks throughout the city and surrounding suburbs. Visit adelaidefringe.com.au/street-art-explosion or pick up a map to choose your own art adventure!

Jump on board the Fringe Caravan because we’re going for a ride! Fringe on Tour brings free family fun, sharing the wonderful and weird across Adelaide and beyond!

Nathan May: Lost In The Dream

On The Couch with Tammy Anderson