A beverage-filled Fringe lineup worth cheersing too! 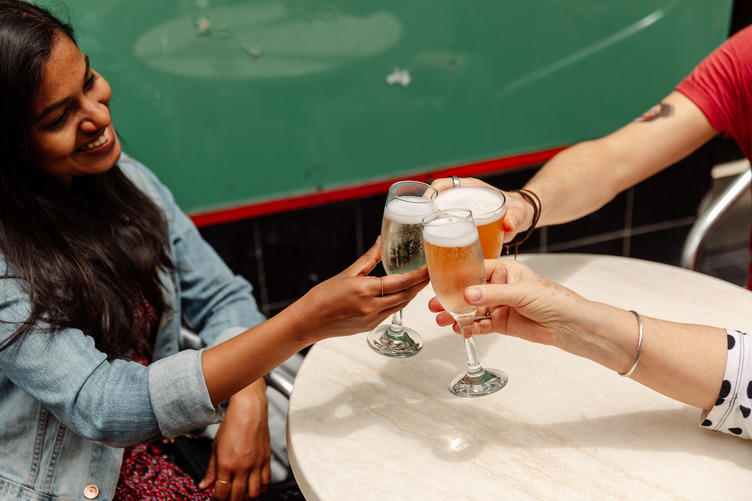 Some of us enjoy a sneaky alcoholic beverage (or two), and so do some of our performers. In fact, they are such fans that they’ve been inspired to feature a beverage or more within their shows, events and exhibitions.

These are events and acts worth raising a glass for! Occasionally emotional and mostly ridiculous, HTDWLAW is a delightful story involving a fabulous flight of SA wines* & 12 months of sobering self-discovery. Follow one woman's accidental journey from shallow wine novice to full-blown wanker; a little rudimentary knowledge to accompany her game face and voila, she became so much more! Part performance, part story-telling, part wine tasting; a full-bodied narrative, with a moreish finish - don't miss the return season of this critically acclaimed, sell out show. The PUBsing trio believes everybody has a voice! Low pressure vocal fun where YOU sing loud and proud with lots of laughter and silliness. Leave the show with a healthy dose of endorphins flooding your body and probably an 'ear-worm' or two. We dare you to join us and banish the workday blues.

"You guys were so brilliant last night and we certainly had fun!"

The sense of community is always uplifting when vocalizing in a group, in harmony... singing is simply GOOD for you and banishes stress! On the cusp of vino domination, The Wine Bluffs (Damian Callinan & Paul Calleja) become trapped in pandemic besieged Eastern Europe. To get home, the sommeliers of premium reserve laughs, must country hop their way through the old wine world. Finally repatriated, they're back to restore their empire & "lovingly lampoon wine snobbery" (ArtsHub).

★★★★½ "Wildly funny winespeak, a romp around the vineyard that seeks to demystify the cellar door experience and only leaves us feeling more confused." Herald Sun Hailing from the furnace heat of the Western Desert block his fire guitar by Mr J Whiskey. An Afternoon of Wine, Woman and Song

A magical place, some fabulous Adelaide Hills wine and a very special performance in the candlebark forest. Kelly Chambers returns for her 12th Fringe, celebrating five decades of song: paying tribute to many greats including Adele, Leonard Cohen, Dido, Beyonce and Ed Sheeran. So gather your friends and pack a picnic for a fabulous afternoon out in the hills.

BYO picnic (No food available at the venue). STRICTLY NO BYO alcohol. Beer, wine and soft drink available for purchase.

Bring your own wine glass or buy one for $5.

All tickets booked through Fringe will be allocated seating on tables and chairs provided. 4 Bars 5 Comedians- the ULTIMATE night out of comedy and booze! ALWAYS SELLS OUT! A pub crawl with a twist.. Strut round four bars with a mystery top-class comedian at each venue! - Trust the Scots to come up with an ultimate night of comedy & booze!

"Whoever was the genius behind the Festival's Comedy Pub Crawl deserves a medal!" Hidden City Secrets An exhibition of artwork by resident local artist Jen Wright amongst other local artists celebrating the early ferments of vintage 2021 and life in the vineyard. Taking a cue from the drag brunch phenomenon in London and New York, this is a femme-tastic and fabulous weekend brunching experience! Hosted by award-winning cabaret queen Victoria Falconer (Fringe Wives Club, Midnight Marauders) and featuring a smorgasbord of world-class cabaret, fierce drag and jaw-dropping circus performers, all in the surrounds of the gorgeous Spiegeltent - your favourite meal of the day just got glitzier!

Grab your pals and treat yourself to a festival experience that will leave you feeling fancy as hell. This is avo on toast with THE MOST. Think scrambled eggs served with sass, songs and sequins. It's the perfect way to start your day... or finish off your night before! Mimosa, anyone?

Smashed is designed as a brunch and show experience. All tickets include a mimosa on arrival, and our fabulous caterers Bitsnbites ADL have created scrumptious omnivore brunching boxes for all table and booth bookings. Compete against your friends and other households to win amazing prizes!

Streamed into select Fringe venues or the comfort of your own home, play on your phone while your hosts put on a show with great music and many surprises. David 'Dave' Davidson's debut comedy show may be socially distanced, but the laughs are closer together than ever.

Performing remotely to no audience, comedian Dave struggles to maintain the momentum in his act. However with effort and a liberal dose of wine, he takes the audience along on his journey to question a seemingly absurd and unfair world.

The Preacher is a digital theatre performance of the Biblical book of Ecclesiastes (Koheleth) framed as a contemporary stand-up comedy show. It explores the relationship between performance and preaching, and contemporary and ancient wisdom. I'm three-quarters of the way through a bottle of Riesling and Riesling has nothing to do with this festival show (at the moment), but I am BACK with another wine history tale.

This year will feature identity theft, pollination, Durif, lies, truths, and the greatest red wine ever produced. It'll be fun. Come have a drink.

"A barrel of laughs" Rachel Rayner. After a year where the bin has literally been out more than she has Tash York, is ready to take the stage after a socially distant year of stewing in her own thoughts! Backed by her fearlessly boozy backing singers “The Red Red Wines” expect an hour of smashing original and parodied songs, true stories, improv and probably a mention or two of her cats (she has 3 now).

Calling out the Karens, cancelling the conspiracies and capsizing toxic positivity Tash York is bigger, brassier and more bold than ever! With a swag of awards and acclaim for her previous solo shows “Adulting”, “Badass” and “Winefulness”, “Trash Talk” is full of exuberance, outrageous behaviour and probably a glass (or 10) of wine to boot! The business lunch is back! In this satirical lecture by Professor Longsword from The MBA School of MBA credentials you come for lunch and leave with a Master of Business Administration*. Why study for months or even years when you can be on your way to start living as high-flying CEO after a 1-hour Adelaide Fringe Show? You can choose between an MBA and show, or the premium option of Lunch with an MBA on the side, at Treasury 1860.

Whether you’re booking the office team in for an extended lunch break, looking to further your career or just want to make your parents proud this could be the life change you’ve been looking for.

*Degree not recognised by most major educational institutions. Zoodle in the Pub

Every week, videos of Australian animals go viral on social media. From barking magpies, a koala chasing a quadbike to emus running amok - we love watching them. But rarely is there information to help explain what these animals are actually doing.

Join well-known local comedian and ABC radio personality Eddie Bannon and Australian wildlife-guru Chris Daniels, as they mull over the science behind popular clips of iconic Australian species. What they come up with might surprise you!

You can also take part in the discussion and find out how to get involved in protecting our amazing biodiversity. It's the launch of a great new project called Zoodle funded by Inspiring SA. It's about having fun while finding out more about our wildlife, and filling a gap on social media. The West End brewery is closing!!!

THIS SHOULD BE A CRIME. Spend the 55 mins listening to tales about the red tins (sometimes not about red tins) and remember when Adelaide was a place nothing but memories of the West End and many other dark stories all from 'West End Friends'.

From sold out 2020 show 'The 3 Imports' comes Zack Southern & his brothers, come see the madness unfold.

Check out all boozy themed shows here.
There are many more shows, experiences and events to make your 2021 Adelaide Fringe the best it can be, all found on the Adelaide Fringe website.

All images supplied by each event.