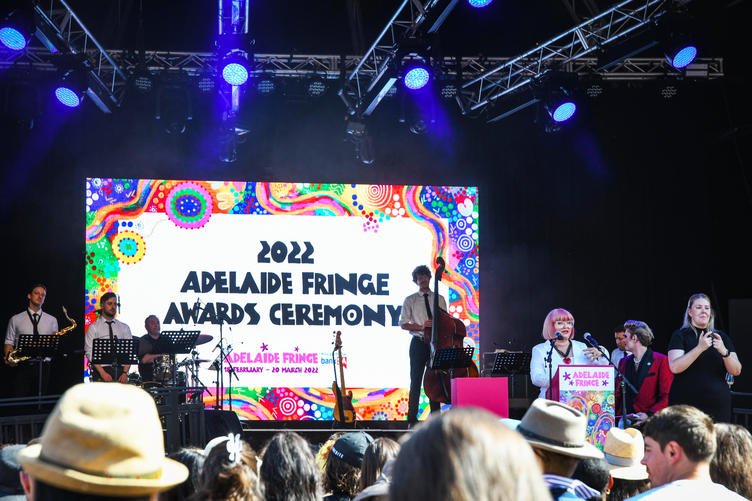 Adelaide Fringe has once again proved itself as South Australia’s favourite festival attracting 3.2 million attendances over the past 31 days and nights.

Against all odds, and despite the ongoing challenges of presenting performances in a COVID-safe format, the internationally loved festival is projected to sell a phenomenal 727,567 tickets, to the value of $19.7 million in box office, including free and ticketed shows.

Adelaide Fringe saw audiences flock from far and wide to embrace the creativity of the festival, with 32,000 interstate tourists buying over 86,400 tickets.

Adelaide Fringe Director and CEO Heather Croall expressed her enormous gratitude to everyone involved in bringing this collaborative festival to life, right at a time when it was needed most.

“Artists, venues, crew, staff and more have worked tirelessly to deliver the 2022 Fringe, and audiences have poured out to Fringe in droves this year. People have navigated the COVID rules and regulations well and we have seen 100s of thousands of attendees come out and support Fringe shows. Adelaide Fringe has, once again, cemented itself as the biggest arts festival in Australia,” Ms Croall said.

“The arts industry has undoubtedly been one of the worst affected industries throughout the pandemic, so the overwhelming support from audiences has truly meant the world and these numbers once again prove that Fringe truly is ‘The People’s Festival’ and is such an important event for our State.”

With an eclectic and vibrant mix of events across cabaret, theatre, comedy, music, visual arts and workshops, this year’s program also saw some exciting debuts including the drone spectacular Sky Song and the VR swings Volo: Dreams of Flight. Sky Song has sold almost 40,000 tickets, many of them to interstate tourists. The stunning immersive arts display Borealis also returned due to popular demand.

Adelaide Fringe has successfully continued to improve on its accessibility initiatives by the implementation of a new access widget on the Adelaide Fringe website, further enhancement of its website included improvements for screen readers, and additional investment to increase the number of shows that have access provisions, including Auslan Interpretation, Audio Description and Tactile Tours.

Ms Croall said as the arts bounces back from the pandemic, she looks to the future for an even more brilliant and dazzling event as the international borders open and we welcome back visitors from all corners of the globe to experience our cultural and artistic phenomenon.

“In 2022, the Adelaide Fringe continued to prove itself as one of Australia’s most iconic events and its impact as the biggest arts festival in the Southern Hemisphere. We look to the future for an even bigger and brighter Adelaide Fringe as the international borders open,” Ms Croall said.

“We can’t begin to imagine the even bigger impact it will have on our state and economy once the international component is re-introduced next year.”

BankSA State General Manager Consumer, Ben Owen said that in the 17th year as Principal Partner, the event continues to elevate itself as one of the most renowned festivals in the world.

“Just four weeks ago BankSA encouraged all South Australians to support the Fringe, and it’s been wonderful to see confidence in the community gain momentum during this time – because nothing brings Adelaide to life like the Fringe.

“Through our commitment, we have continued to support independent artists through the Support Act initiative, putting over $15,000 directly back into the pockets of emerging artists at a time when they need it most.

“And this year, we have supported the new MyFringe Planner which has been overwhelmingly popular, helping 150,000 audience members smoothly plan their Fringe experience.

“We take great pride in making the Fringe as accessible for as many people as possible - it truly is the festival for everyone.”

Due to the success of the festival, many artists have decided to extend their season, with Gluttony announcing their encore season and Sky Song announcing an additional weekend due to huge demand. The Watch from Home program has also been extended by three weeks allowing audiences to continue to Fringe from home until the end of March. Tickets for all events with extended seasons can be purchased at adelaidefringe.com.au and many shows will run until April 1.

Adelaide Fringe 2022 was supported by the Government of South Australia Arts Recovery Fund and Restart Investment to Sustain and Expand (RISE) Fund – an Australian Government initiative.